Star Wars News Net posted a transcription of their SDCC interview with Steve Evans and Joe Ninivaggi on their homepage. It is a very interesting read with some very revealing and perplexing answers to straight forward questions, you have to read it to believe it. Click through for some more details! 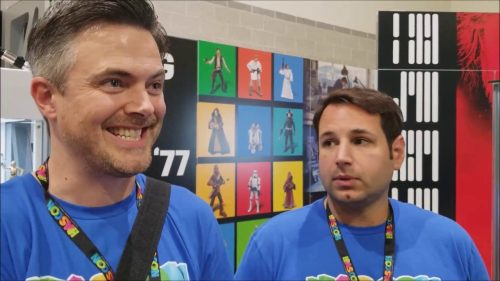 I encourage you to read the full interview on the SWNN website. But what I would like to talk about here are two key answers by Steve Evans that raised my eyebrows.

When asked whether or not we can expect more Clone Wars figures soon Steve Evans replied that they learned about that only recently, so “soon” is the problem here. Hasbro was working on more prequel / Clone Wars figures or at least thinking about them when they learned about Disney’s plans. So Hasbro was kept in the dark about it for a considerable time, giving them no opportunity really to already develop a few TCW characters.

The most perplexing reply came in regard to the question of whether or not we will get a Crait Luke figure.

Steve Evans said this: “This is one of these things where we clearly are very close with LFL, and we know most of the stuff that is happening, but some stuff we don’t know and rightly so they need to tell the story, we are part of that. I didn’t know about Crait Luke until I saw him on the big screen. So yeah, there will be a Crait Luke, there will be some stuff coming.”

It’s nice to know we’ll definitely get a Crait Luke. But to put it in other words: Disney kept the existance of Crait Luke a secret to its main merchandise partner who learned about him in theaters…. which prevented said partner to release a figure of Crait Luke in time for the movie.

This, to me, is really perplexing. What are the thought processes at Disney behind all that? Do they really believe it makes sense to keep these things secret from Hasbro and not involve them very early on? Does Disney actually think Crait Luke will be a highly sought after figure in late 2019 in time for the release of Episode IX?

Disney, in my opinion, really needs to reconsider their approach. Why keep your licensees in the dark? It is literally money lost. How can your main merchandise partner not know about The Clone Wars and Crait Luke months in advance so they are prepared and can release product in time?

So next time Hasbro has no product to show for an interesting character or new show… you know who is to blame.

Read the full interview over at Star Wars News Net!