Awesome! Special Action Figures Sets Are Back, But Let's Get Back To Basics

OK, so the Doctor Aphra Comics Set was an interesting, albeit gimmicky reintroduction to the classic Kenner Special Action Figures Sets of yesteryear. Don’t get me wrong. I am thrilled to see this sub-line out once again, but it’s time to revisit the original sets’ legacy. During the initial run of The Vintage Collection, Hasbro produced many of them for collectors, and all were released as TARGET exclusives. However, we are still five sets short of the sixteen originally produced. Let’s find out what it would take to complete them for us shortly. Click through for more! 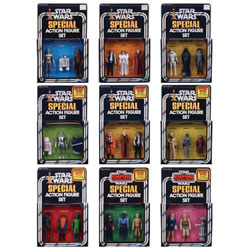 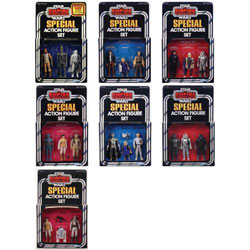 We have great Han Solo figures in the parts catalog already. This would be an ample opportunity to refresh the VOTC Princess Leia Organa figure and give her a new head sculpt and new arms, although, an all-new sculpt is essential at this stage of the game. Any of the 2008/2009 era Obi-Wan Kenobi figures would work here as well.

Since 2012, Hasbro has had an all-new sculpt of Momaw Nadon/Hammerhead in the works. It’s hard to believe that it has gotten nowhere after all of this time. It would be required to round out a modern update of this set along with reissues of Ponda Baba (Walrus Man) (VC70) and the repainted version of Greedo which is 2010’s SW [SOTDS] Greedo (SL04) figure (with an all-new molded vest of course).

Just like Hammerhead, Hasbro has also had an all-new version of Lobot tooled since 2012. It’s time to get that sculpting into production so they can complete this set along with the LC’s Ugnaught (BD28) and TVC’s Han Solo (Bespin Outfit) (VC50).

We have an excellent, albeit imperfect, versions of all three of these figures in the line. This is an easy no-brainer set for Hasbro. Leia (Hoth Outfit) (VC02) and Luke Skywalker (Hoth Outfit) (VC95) figures come to mind. Let’s get to it!

Again, we have PLENTY of figures under our belt where Hasbro could easily recreate this set including LC’s Ugnaught (BD28) and TVC’s (Twin Pod) Cloud Car Pilot) (VC11) figures. Here’s hoping they get to it as soon as possible.

And if Hasbro has it in their hearts, I am desperate to see a redo of this set because the last one doesn’t cut it for me.

An all-new Stormtrooper sculpt that would help support the Disney-era Rogue One: A Star Wars Story film as well as the Original Trilogy. We have a flawless Darth Vader figure (VC93) and if Hasbro would please paint the Imperial Navy Commander (VC94) figure gray our longtime wishes would finally come true.