It’s astounding to me how poorly the Legacy Pack sold across all retail levels. It feels like it sold as badly as the 6″ Special Force TIE Fighter. And now as Toy R Us gets ready to close its doors forever, MORE cases from the warehouse are arriving at 60-%-80% off. It’s the only way to get the 40th anniversary Darth Vader (in the vintage Kenner line look). How did this not sell better than it did? I have never seen something so collector-friendly pile up at retail as this release did. And I have been collecting the modern line since 1995. Again, nothing has piled up like this set in my experience. Hasbro isn’t grabbing the right group of collectors with this stuff. 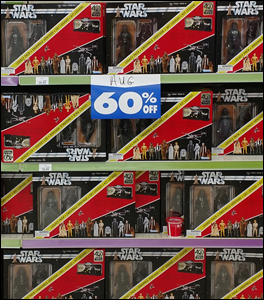 Previous Article: Hasbro Rogue One AT-ACT For Less Than $45