The Pillars Of The Star Wars Franchise

Star Wars has been a global phenomenon since 1977. Millions of fans enjoy the movies and play with the toys. But how does Star Wars actually make money? Movies? Toys? And it’s also time to take a closer look at the fandom, as there are several distinct groups of fans, and each group has different needs and wishes. How does all that align with what Lucasfilm, Hasbro and EA have on offer? The ultimate puprose of this article is to start a discussion about just that: what do we all want? Click through for details!

Before I delve into more detail let me preface this article by one fundamental truth that is not up for discussion. Even though the article attempts to illustrate that there are several distinct groups of Star Wars fans, with each group having more or less influence on certain things, all fans are still equal. Whether you’ve been a fan since 2017 or 1977, it simply doesn’t matter. This is not about who’s a better fan or whether a longtime fan is entitled to certain things while other fans are not, to make this very clear! This is only about what each fan group has certain control over by their spending habits.

So, how does Star Wars actually make its money? Some, many of you will probably already know that, but I think this needs to be brought up anyway.

Unfortunately, up to date numbers are not available for free, only Lucasfilm and Hasbro know all the current numbers that account for the new movies. What we have are numbers from a few years ago, just before The Force Awakens was released. So while the following numbers are not up to date, they still give you a general idea.

The following graphic shows you how much any of the major categories, i.e. toys, movies, games etc account for the overall Star Wars revenue (please click the graphic for a larger version): 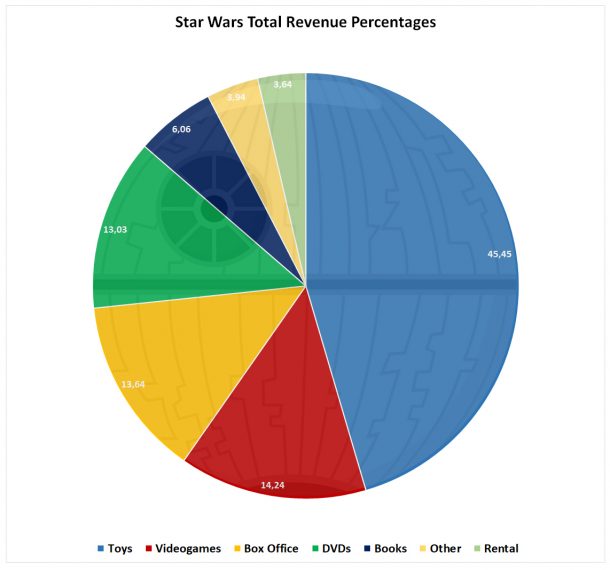 And in total revenue:

Now this was in 2012, the most recent numbers I found. Replace “rentals” with “streaming”, add “Blu-Ray” to the “DVD” category (with DVDs becoming obsolete), but the overall picture will be similar in 2018. Box office will have a somewhat larger share (all time worldwide Star Wars box office is about $9 billion in 2018, including Solo), with one movie each year, but even so, in 2016 approx. $700 million worth of Star Wars toys were sold in the USA alone, add worldwide toy sales and the general takeaway from this is clear: Star Wars makes most of its money with toys and merchandising, even with one new movie release each year.

I also found this: in the year 2011 (the most recent reliable numbers I found) all time Star Wars action figure sales (Kenner and Hasbro combined) had amounted to $10 billion worldwide.

Another quick fact: in 2017 the game Battlefront II sold about 9 million copies, and this was considered to be an underwhelming number because of the loot box controversy. Roughly 4.8 million Star Wars Blu-Rays and DVDs were sold in 2017. So the game almost sold twice as much copies.

In other words: Toys are the most important source of revenue. Games are a huge factor too, Star Wars makes more money with games than with home media releases. Now that doesn’t necessarily mean that Lucasfilm makes most of its money with toys, but we’re taking a more holistic approach. Lucasfilm, Hasbro, EA, Funko and countless other companies all want a piece of the pie.

Now that we have established that toys (and merchandise) is the most important source of revenue for Star Wars, take a look at the following graphic: 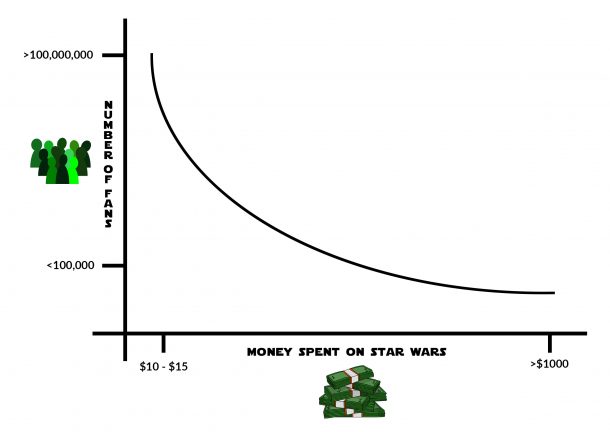 What this simple graph tells us is a very basic truth, but a very important truth nonetheless. Many people spend a little bit money on Star Wars each year, and the more money is spent, the fewer fans you will find in this group.

You make a quick buck with movies, they have a shelf-life of maybe 3 months in theaters, then it’s game over at the box office. Next up are Blu-Rays, you sell a considerable number of discs within 12 to 24 months perhaps, after that it’s more or less a slow trickle. Toys and merchandise based on one movie however, can be sold for years. Not always the same toy or the same merchandise, but one movie can easily be used to make 30 action figures, many t-shirts and other things. Whereas a Blu-Ray has maybe 2 or at most 3 editions. Then you might have a boxset, but that’s it. In the long run, we’re talking years here, toys and merchandise will therefore always make much more money than the movies themselves. Which is shown in the chart further above.

I differentiate between several groups or pillars of Star Wars. This is somewhat of a generalization and simplification, there’s also some overlap between groups, but I hope it gets the point across:

Now, how many people are in each group is not really known. Except for the 1st and 5th group. The 1st group is easy to gauge, all the people who see Star Wars in theaters but never buy anything else. To gauge this group… The Last Jedi sold about 69 million tickets in the USA. 2.4 million blu-rays have been sold so far. Which means more than 60 million people in the US have zero interest in ever owning a disc release, this is the vast army of casual fans, they give you 10, 15 or maybe 20 dollars, but that’s it. The Force Awakens even sold more than 110 million tickets in the USA alone. There is huge potential but most people will always be just casual fans or a moviegoer who simply sees any movie in a genre.

As you can see a hardcore fan can easily spend as much money on Star Wars as 500+ casual fans combined. Also, I believe that the needs and wants of each group are different and that group 4 and 5 have (sometimes) different needs than the first two or three groups.

Because, and this is what I postulate: whereas group 1 is the most diverse, when it comes to age distribution, gender and ethnicity, groups 5 and 4 are much, much more homogenous, meaning, I believe that group 4 and 5 is primarily (not exclusively!) made up of a) men and b) somewhat older people (aged 30+) and perhaps even c) predominantly white. This is just a guess, to make that very clear. I have no demographic data for any of these groups. It is however, based on observation. But no real data exists, so it’s just a theory.

Basically, I believe group 5 includes many OT or PT fans who grew up with either the OT or PT, maybe more OT fans than PT fans, but this is difficult to say.

So what does this all mean?

Since Jedi Temple Archives is about toys I will focus primarily on toys. It means that Lucasfilm and Hasbro may perhaps focus too much on groups 1 and 2 by releasing movies and associated merchandise that caters to them. They also try to appeal to the other groups, there is the occasional OT or PT figure or merchandise, but the new movies are the primary focus.

Combine that with the article about Pablo Hildalgo’s tweet from yesterday and the ultimate question is this: does Hasbro actually cater to groups 4 and 5? They may not be as large as the other groups, but they generate a lot of revenue, especially when we talk about action figures.

I argue that the people who earn Hasbro the most money are in groups 3, 4 and 5. Hasbro will usually not reach the casual fan. They hope to convert casual fans into more serious fans. Forces of Destiny was an attempt at winning more female fans, and primarily little girls, who later grow up to be members of groups 3 – 5. This has obviously failed.

It can be argued that Hasbro has two toylines that cater to members of group 3, 4 and 5. TVC and Black Series. But the new movies are not universally appreciated in these groups – this is a theory, I have no numbers, so this is up for discussion, but anecdotal observation may support this theory.
Since the toylines focus so much on the new movies it may very well be that Hasbro is not making as much money as they could, if they actually cared more about what fans in the groups 3 – 5 want.

To be more specific: when Hasbro releases figures of Rose or Holdo they mostly fail to enthuse those people who actually buy most of their figures.

And this is what it’s all about: I believe there is, at the moment, some disconnect between what Lucasfilm does, what the casual fan wants and what the people who buy most of the toys want. I believe fans in groups 3, 4 and 5 should have absolute priority when it comes to toys. Hasbro should realize that action figures are no longer bought by kids, but by adults. They should also realize that a good percentage of these people who buy action figures are probably somewhat older, probably more likely to be male than female and probably more likely to be a huge fan of the OT and PT and not so much of the sequels.

One final thought: Star Wars has the distinct advantage of a rich history. There are now 11 movies and several tv shows and comics to choose from when you look for characters you want to release in the action figure format. That being said, if a disconnect between current movies and fans who mostly buy the toys continues then the entire business model might be in danger.

So, what do you think? Do you believe that the hardcore fans are the most important customers of Hasbro? Or do you see evidence that a vast number of more casual fans who only buy a figure here and there earn Hasbro more money? Should Hasbro acknowledge that a focus on the new movies is maybe not the way to go forward, to release only the most important figures from new movies but with a heavier focus again on characters from the OT and PT?
Or would that spell certain doom since most casual fans who sometimes buy a figure are mostly interested in figures from the new movies? How do you see it?

One final note: while researching this article I found a recent YouTube video by David Stewart, who, coincidentally, talks about the very same topic as this article. I did not know about this video before, but his thoughts are quite similar. You might want to check it out, it’s almost 20 minutes but quite informative!