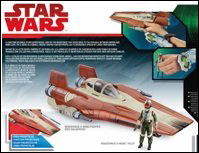 You have the power to bring the galaxy to life. Take the exciting adventures and missions of a galaxy far, far away: with Hasbro’s interactive game system FORCE LINK!
With the Force Link technology on your wrist, you activate light and sound effects, even phrases from the movie. The Force Link Band is compatible with every action figure, vehicle, accessory and play set from the ‘Force Link’ range (sold separately).

The Green Leader’s A-Wing Fighter is in proportion to the 10 cm (3.75 inch) action figures, of which 1 Pilot is supplied as a highly detailed and fully agile action figure. This fits into the cockpit.

The cockpit and the chassis of the A-Wing Fighter can be opened by a regulator.

Everything is delivered together in an attractive window box.

This is a Walmart Exclusive!