My Thoughts On "Solo: A Star Wars Story"

I just got back from Solo: A Star Wars Story. Do you want to know my thoughts on it? Are you ready for the mentally ill Twitter trolls to begin their cowardice and tell you and me how we SHOULD feel about it? Then click through for more!

Wow. There are WAY too many female leads in Solo: A Star Wars Story! (more…) 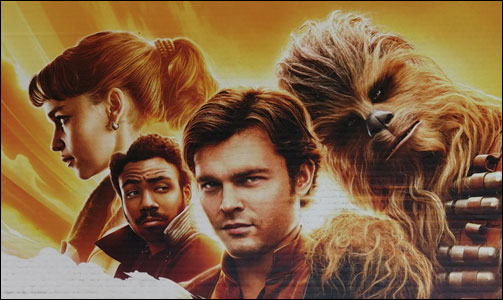 I’ll get into Solo in a moment, but I would like to say that the Disney Star Wars standalone films are proving that Lucasfilm has absolutely no clue with what they’re doing with the episodic series films like Episode VII and Episode VIII. It blows my mind that Disney knows EXACTLY what they’re doing with Rogue One and Solo, but cannot continue the Star Wars saga with anything that is believable, established and respected. Again, it’s mind-blowing.

Solo: A Star Wars Story is a pleasant surprise, and exceeded my expectations by a landslide. It’s easily the best of all Disney Star Wars films produced to date. I am sure this film’s success has much to do with veteran Hollywood director Ron Howard turning the Titanic back around in time to salvage what was rumored to become an absolute train wreck. It’s not a flawless film by any means, but it is nonstop with action-packed sequences, over-the-top twists and turns, and energy that is COMPLETELY lacking in most other Disney Star Wars films. Solo: A Star Wars Story tells a tale that, for the most part, longtime Star Wars fans want to hear. There were some things in the film that irked me (like the Imperial officer giving Han his last name of Solo). But then there were others that choked me up (like how Han met Chewbacca for the first time and how their chemistry became inseparable from the moment they met).

Yes, it’s challenging to see Alden Ehrenreich as Han Solo. It’s tough. But the effort seemed to have paid off because you almost don’t care about after the first 30 minutes into the film. Lando Calrissian, on the other hand, portrayed by Glover, did an EXCELLENT job both vocally and in mannerisms imitating Billy Dee Williams’ swagger and coolness. A sucker for self-sacrifice in films, I found Val’s death shocking and emotional. She allowed herself to be killed because of her love for Beckett. It worked very, very well. Qi’ra ultimately disappointed me, but she was a victim of what I’d consider the roughest writing of the entire film. She appears to betray Han Solo, then the leader of the Galactic Dawn (I may have that name wrong) and then back again. It was dizzying, confusing and a little bit lacking in authenticity. Emilia Clarke’s tiny frame turned into ninja expert in seconds, so I found that a bit unbelievable too. But, whatever.

The Episode I nods were cool, but I am not sure if they were needed. I did like knowing that Becket killed Aurra Sing, but the cameo of Darth Maul felt exaggerated and unexplained. More should have been presented in his unveiling. I was TOTALLY lost when they were flying in space with the super-large rathtar-looking beast. I honestly had no idea what was going on in those many minutes. I didn’t want to ask my friends next to me, but I may have to watch the film again to better digest what transpired. It’s probably something simple, but I was utterly lost. I loved all of the Episode IV nods too. The Death Star Droid cameo was my favorite. But I also appreciated seeing aliens that I recognize, most notably the Rodian on Enfys Nest’s team. Enfys Nest was a cool character, but I don’t understand the secrecy surrounding her character. She was another earthy and believable character, and I am curious to learn about her background. I did find it interesting that she is another part of the founding of the Rebel Alliance.

The Range Troopers and Mimban Stormtroopers were very cool to see, but their scenes flew by at lightspeed, and it would have been wonderful if they all had more screen time.

I didn’t like the L3 droid at all. Some may find her humorous, but I found her extremely annoying. That’s just my opinion.

Yes, the fanservice nods were subtle, but immensely appreciated. I am not alone in my opinion on this.

The Sequel Trilogy is overloaded with boring, trite, pointless and ridiculous characters. But that’s not the case for Solo: A Star Wars Story. I really enjoyed the film. Now if they can only turn around the sinking ship that is the Sequel Trilogy.