The Black Series line is rich with exclusives in 2018. We have Chewbacca, the Mimban Stormtrooper, the Gamorrean Guard, Commander Wolffe, hopefully Zuckuss will be sold somewhere too.
There may be some need for exclusives, from a business standpoint, however, for anyone not living in the USA exclusives are what sucks the joy out of collecting. Some exclusives never make it to other territories, and when they do, they come at a price… Read more after the jump! 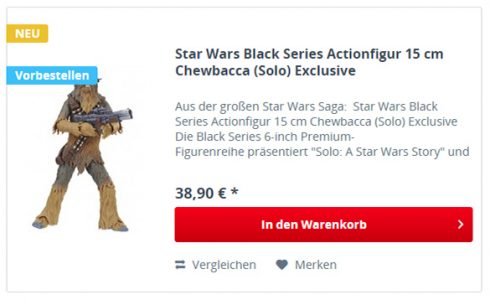 Let me show you a screenshot, taken from two etailers, one German, one Japanese, which shall go unnamed because it’s not about them, the situation is the same virtually anywhere else, no matter what etailer. This is about Hasbro and their exclusives. 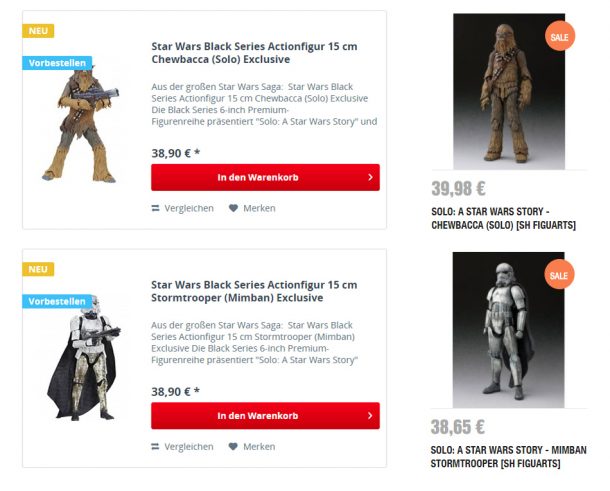 The price for these figures is roughly $48 each

I have a few questions.

1) How can it be that a Black Series exclusive figure is more expensive than a Japanese import figure?

2) Why is it that virtually anyone not living in the USA gets fleeced and scalped when it comes to exclusive Black Series figures?

3) What will Hasbro do to stop this and to make sure that exclusive Black Series figures will no longer cost the equivalent of  more than $48 in Germany and other parts of the world?

4) Does anyone involved in the business think $48 for a Black Series figure is a fair price?

5) Does anyone at Hasbro believe their figures are actually worth $48?

6) Does anyone at Hasbro believe that these figures will sell well in Europe and elsewhere?

7) Why would I order a Black Series Mimban trooper or Chewbacca when I can have the SH Figuarts version with many more accessories? Sure, I have to pay shipping, but order Chewie and the Mimban trooper together and the cheapest shipping option only adds another 9-10 euros or so.

In a year that gives us so many exclusives it’s disheartening to see that fans outside the USA still have to pay these prices. Prices for regular figures have come down a bit in 2018. But apparently most exclusive figures still come at an exclusive price.

What is the situation in your country? Are prices similar to the ones shown here? And what answers would you like to get from Hasbro?