The MPAA report for 2017 was released yesterday. And like each year the report lists some informative statistics about the age of moviegoers, their ethnicity and overall gender share. Disney Star Wars is, among other things, about inclusivity, gender equality and Kathleen Kennedy’s own goal is to bring more girls and women on board the franchise. The MPAA reports since 2015 (when The Force Awakens was released) shed some light on how Lucasfilm’s strategy to win new fan groups has worked. Click through to learn more! 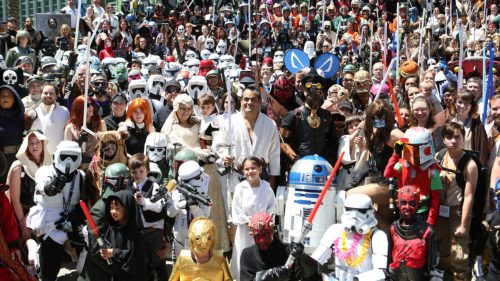 First up a quick reminder about box office performance for the three Disney Star Wars movies in North America. 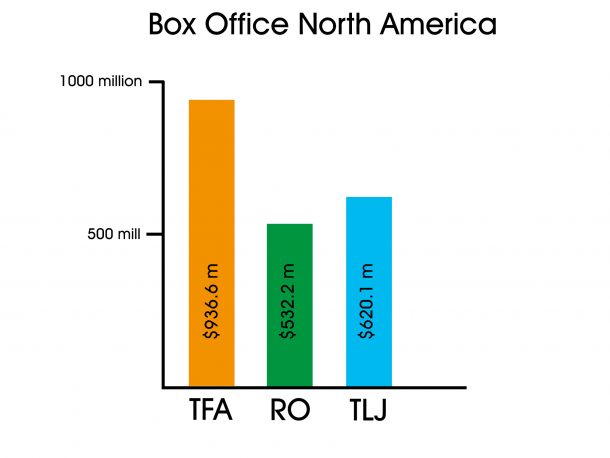 Each of the three Star Wars movies was the number one movie at the box office in its year of release.

Next up is the gender share for each of the new movies. 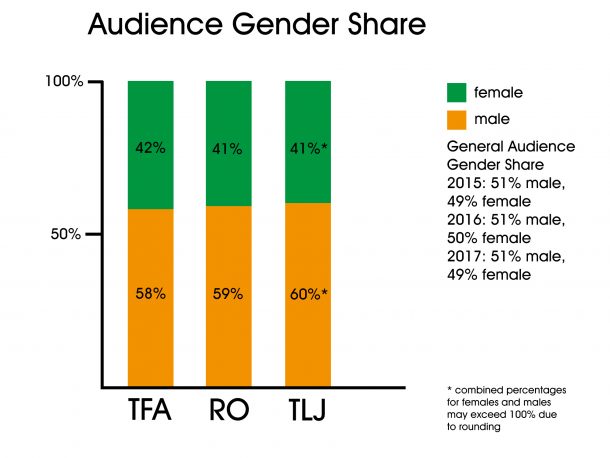 As you can see Star Wars is still a movie franchise dominated by males. While the general gender share for moviegoers is 51% male and 49% female, Star Wars has a much higher percentage of males.

With the inclusion of so many female heroes and female side characters and Kathleen Kennedy’s intention to bring more girls and women into the franchise one could have thought that the gender share for the Star Wars movies would reflect that trend. However, it doesn’t. Actually, the male gender share is rising ever so slightly with each new movie released. While TFA had 58% male moviegoers, TLJ has 60%.

It is, of course, unknown what the gender share for the prequels or original trilogy was. No comparable statistics exist for these movies. It is likely that TFA had a higher share of female moviegoers than previous Star Wars movies. But since then no new female fans were won and the share of female fans is sinking, stagnating at best.

And now a closer look at the ethnicity of Star Wars moviegoers. 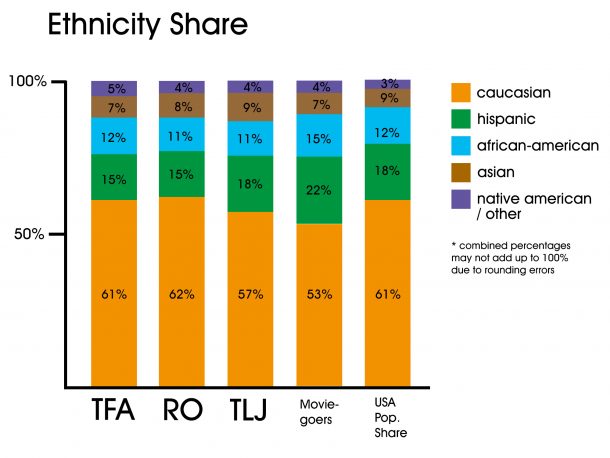 The statistic shows that Star Wars moviegoers are predominantly Caucasian.

Caucasians are vastly underrepresented among moviegoers in general, Asians less so, whereas Hispanics and African-Americans are overrepresented.

What is the situation for the Star Wars movies? TFA and RO more or less represent the actual ethnic make-up in the USA, Hispanics and Asians are slightly underrepresented.
But an interesting effect can be seen for The Last Jedi. All of a sudden fewer Caucasians went to see the movie in theaters, whereas the percentages for Hispanics and Asians rose somewhat.

This sudden drop in Caucasian Star Wars moviegoers could be correlated with the so-called backlash. Much discussed, most analysts agree that The Last Jedi underperformed by up to $200 million at the domestic box office. When you look at the box office performance you can see that The Last Jedi was heavily front loaded and performed more or less on par with Rogue One ever since week two.
It can be speculated that it were predominantly the hardcore Caucasian fans who didn’t went to see the movie a second, third or fourth time in theaters which lead to the drop in Caucasian moviegoers.

So, what is the state of the Star Wars fandom, at least regarding moviegoers? Since no comparable statistics for the OT and PT movies exists it is unknown what the gender shares for these movies were. If TFA brought more females into the franchise it can be said that any subsequent movie lost some female moviegoers. Overall, Star Wars is still dominated by male fans, despite Lucasfilm’s efforts to win new female fans with Forces of Destiny and the inclusion of many more female characters in the movies.

Star Wars is also still dominated by Caucasian moviegoers. But TLJ had a lower share of Caucasians fans than before. While the exact reasons are unknown, it can be speculated that the backlash contributed to less repeated viewings by Caucasian hardcore fans.
Also, if Lucasfilm wants to win the hearts of African Americans, Star Wars only does an ok job and has a below average share of African-American moviegoers. It seems to gain some favor among Hispanic and Asian movie fans.
However, Star Wars moviegoers more or less still represent the actual ethnic make-up in the USA.

And finally, I will try to shed some light on the backlash for The Last Jedi.
Here is one final statistic: comparing ticket sales for TFA and TLJ for each ethnicity.

What is your opinion? Are you surprised that Star Wars is still seen by a majority of (white) males in theaters? Would you have thought that more women or minorities would see the movies? Do you think the numbers presented show that The Last Jedi underperformed? And what do you think Lucasfilm will do? Will they keep trying to win new fans at the possible expense of legacy fans?