Jedi Temple Archives was invited to an exclusive Google Hangout session with Hasbro earlier today. We partnered with Star Wars Action News and our pals at Bantha Skull to ask a series of burning questions we had about the first HasLab campaign. The Hasbro Team talked about the recently revealed painted Jabba’s Sail Barge prototype and exclusive Yak Face figure. Then we were offered the opportunity to ask the Hasbro Team our questions, one at a time, by each fan site represented until the Q&A time expired. Finally, Hasbro gave us an intimate look at the painted Jabba’s Sail Barge with close-ups and verbally described its many unique features. We’d like to thank Hasbro for taking time out of their day to do this Google Hangout session with us, and we appreciate Litzky PR for coordinating it. They also have provided NEW and EXCLUSIVE images of some of the finer details of this beautiful vessel. Click through for more!

*There are secrets in this image – Find out what they are!

Hasbro was asked to clarify the disclaimer on the HasLab website versus the latest Instagram post that seemed to have contradicted it.
Answer: Steve Evans and Joe Ninivaggi made it clear. Jabba’s Sail Barge for USA and Canada WILL ONLY BE MADE AVAILABLE through the HasLab campaign.

Will the included exclusive Yak Face be one of the rarest Hasbro Star Wars figures produced to date?
Answer: Yes. Hasbro is pretty sure Yak Face will be one of the rarest. They cited examples of SDCC exclusives made in years past close to that number of units and a commanding a fortune on the aftermarket today. (I was so right about this.)

How will Hasbro handle broken or missing parts?
Answer: Everything will be handled through their standard methods via Hasbro.com (https://www.hasbro.com/en-us/customer-service/) or by calling (800) 255-5516.

Will Hasbro keep #backthebarge buyers apprised during the waiting period until delivery?
Short answer: Yes. The complete timeline hasn’t been planned out. (Everything is new for everyone.) But they won’t leave us in the dark.

Why wasn’t some form of monthly payment plan offered for Jabba’s Sail Barge? Is some kind of flexible payments possible for future campaigns.
Answer: This was Hasbro’s first HasLab project, and they explained that they are learning things daily from it. They hope to take all feedback garnered from this campaign and apply it to a future HasLab offering.

Is the included Jabba The Hutt an all-new figure? It looks very similar to the Jabba’s Rancor Pit Jabba The Hutt, yet different at the same time.
Answer: Mark Boudreaux confirmed it’s the same sculpt as The Black Series [Phase II] Jabba’s Rancor Pit figure. But Hasbro has gone “all out” with the deco this time to give him the most realistic paint job possible. (This is great news as that figure has a fabulous sculpt. I wonder if Rum Sleg believes it’s all-new yet.)

Can Princess Leia (Jabba’s Slave) get re-released (as well as other complementary figures) so people can populate their Sail Barge.
Answer: Hasbro is looking at what figures make sense for a re-release. Princess Leia (Slave Outfit) is a possible candidate.

Will the Jabba’s Sail Barge box be taped?
Answer: Steve asked me for my opinion, and I said I would prefer untaped. They appeared to agree, but then equivocated on it a bit as if they want to think about it more. Steve hinted to Joe about just dropping the box untaped in the shipping box. Apparently, we need more clarification on this. If you want the TVC box untaped, be sure to leave your thoughts in the comments.

What is Hasbro’s ideal rate for HasLab Star Wars campaigns?
Answer:  one per year

So that collectors have time to budget, is there a way to work with fan sites to prepare the collecting landscape for big-ticket items without spilling the beans on the specifics of that item?
Answer:  They’ve gained a lot of insight with the Sail Barge campaign and can take that into consideration for future campaigns.

Will the success/fail of the Sail Barge be evaluated in a vacuum, or could it impact decisions with The Vintage Collection?
Answer: It will not impact the mainline The Vintage Collection.  Hasbro is not judging TVC audience by performance of the Sail Barge. It may inform future “left field” HasLab campaigns. Hasbro understands that Jabba’s Sail Barge is a very special item for a special audience. They would never allow this campaign’s performance to influence their plans for the mainline.

Jabba’s Sail Barge comes WITHOUT any foot pegs, save for the cannon. Hasbro wanted to keep the aesthetic as movie-accurate as possible and also prevent where people might want to place figures as they populate this massive vehicle.

The axes are permanently affixed to the wall of the Sail Barge. However, there are places to place loose weapons packaged with figures.

Jabba’s Sail Barge dais is movable. His microphone can be taken out of its control panel, and they are going to give the cord extra length so C-3PO can hold it.

Jabba’s mural is painted like a real painting. Gamorrean Guard head, Rancor, and Ishi Tib are all painted trophies.

Figures who pilot Jabba’s Sail Barge will be able to walk through the back of the cockpit into the main Sail Barge.

The trapdoor on top level goes directly into the prison cell.

At the very end of the Google Hangout, I threw this out to Steve and Joe: “Thrown in the TVC Salacious Crumb (VC66) and the TVC Mouse Droid (VC67) and you’ll have this thing backed in a day.” Steve said, “That’s what you said about Yak Face.” (I bet you didn’t know Steve Evans is also a comedian.) 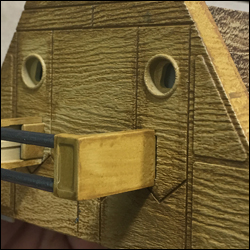 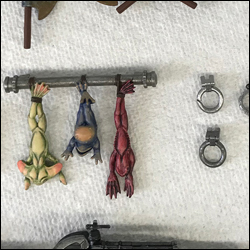 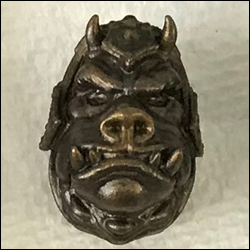 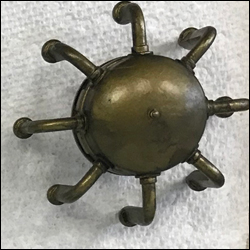 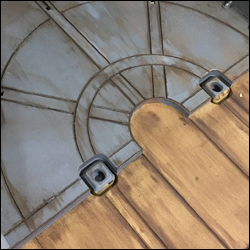 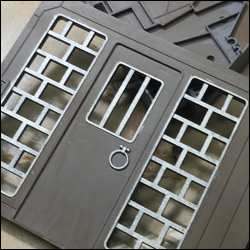 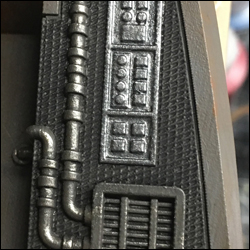 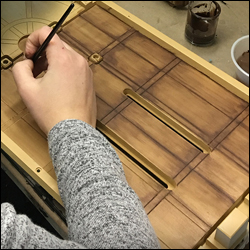 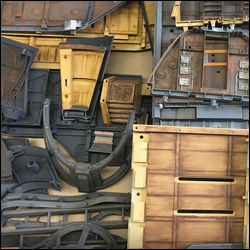 Previous Article: Can't Or Won't Back The Barge? Back Toys R Us Instead!

Next Article: Toys R Us Founder Dies at 94