After some recent articles I think it is a good idea to get everyone to calm down just a little.
Most here are probably not acquainted with crowdfunding. And this is Hasbro’s first foray into crowdfunding too – and what a project it is. They ask for no more than $2,500,000. Or $500 from each backer.

As of now the Barge has 2,595 backers. Progress has stalled considerably in the past few days, despite opening up the project to Canada. Reason for panic? Is the Barge bound to fail? Let me show you a few graphics to give you hope and confidence. 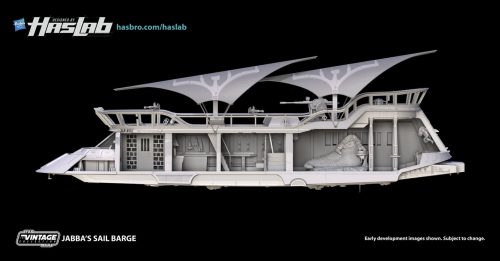 Beasts Of The Mesozoic. Average pledge $132.

As you can see all these successful projects have one thing in common. A huge spike of new backers during the first 1-3 days and another huge influx of backers on the last 2-3 days or so. And there’s a serious lull inbetween.

The HasLab Sail Barge shows the exact same distribution of backers. And it is very, very likely that there will be a huge spike of new backers during the last few days of the campaign. More than you probably imagine.

Now, with this being said, those campaigns had stretch goals. Their overall funding goal was way less than $2,500,000 and all of these campaigns went way beyond their original funding goal. The Barge has no stretch goals, it needs more backers. But despite the differences the overall dynamic is the same.
The campaign coming closest to the Barge is the Mythic Legions 2 campaign. Average pledge was $501, the campaign raised almost one million dollars and had 1,868 backers. The Barge is way past that already. Yes, it is more ambitious, but the fan base for the TVC Barge is also much larger. Never forget that. We’re talking Star Wars here.

With all that being said: please don’t panic yet. Keep calm. Don’t speak of failure. To do so is premature and might actually hurt the cause. The barge is right on track. Let pure numbers convince you. And don’t forget to #backthebarge.