Jason Fry’s “The Last Jedi” novel reveals how Rey could use the Jedi mind trick on Starkiller base and later force pull the lightsaber from the snow – without any training whatsoever. Click here to find out how she did it! 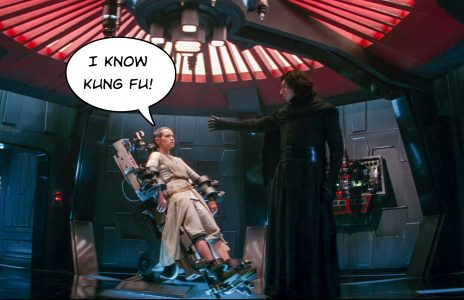 So how did Rey pull off these feats? It has been speculated for a while now and the Last Jedi novel finally confirms it: Rey kind of force downloaded some of Kylo Ren’s skills and training. Here is the relevant passage from the Last Jedi novel by Jason Fry where he describes the interrogation scene in The Force Awakens:

Kylo had retreated at finding Rey in his head—had practically fled from her. But that had not been the end of that strange, sudden connection. She had seen more—far more. Somehow, almost instinctually, she knew how he accessed some of the powers at his command—even though she didn’t understand them. It was as if his training had become hers, unlocking and flinging open door after door in her mind.

So there you have it.
What do you think about it? Do you like the explanation? Do you feel Rey being the Star Wars version of Neo in the Matrix is somewhat lazy?
I personally don’t really like the idea. Why did the Jedi put their Padawans through years or maybe even decades of rigorous training when you can learn the Force instantly by Vulcan mind melding with someone else?
They did have to find an explanation for Rey’s powers, I understand the reasoning behind it. How else can you explain Rey’s sudden skills? I still believe it’s a somewhat bad idea to have someone become a Jedi Master junior grade practically overnight. It removes all the effort.
But at least we all know now how Rey could do all the things and why she can lift several tons of boulders at the end of The Last Jedi, whereas Luke had trouble floating a rock and Yoda at the same time during his training. If only Yoda had mind melded with Luke!