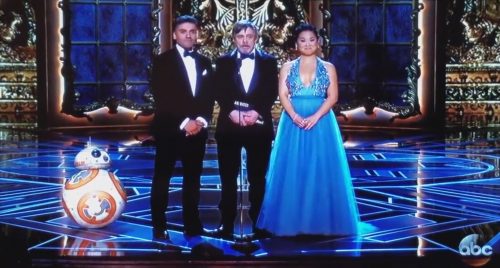 Star Wars The Last Jedi was nominated for four Oscars in the categories Sound Editing, Sound Mixing, Visual Effects and Original Score.
The Last Jedi lost in all categories. Sound Editing and Mixing went to Dunkirk, which is hard to argue with. Visual Effects was won by Blade Runner 2049 which did a stunning job with its visual effects and abolutely deserved the Oscar for CGI Rachel alone – which looked much more convincing than Tarkin and Leia in Rogue One. And finally, The Shape Of Water won the Oscar for Best Original Score.

I do think that Mark Hamill should have received a nomination for Best Supporting Actor, but it wasn’t meant to be.

However, three Star Wars actors and BB-8 were on stage – but as presenters for Best Animated Short and Feature Film (Pixar won its 100th Oscar). Mark Hamill was genuinely funny as usual, Kelly Marie Tran looked stunning in her dress and Oscar Isaac was cool as ever.

Gender equality, inclusivity and diversity were the hot topics of the evening. But there were some fun moments too, especially when host Jimmy Kimmel crashed a screening of “A Wrinkle In Time” with Mark Hamill, Gal Gadot, Guillermo del Toro, Emma Stone and a few others to hand out snacks. It must have been a very memorable moment for the audience in the cinema.
There were few actual surprises. The Best Screenplay Oscar for Get Out being one of them.
And with Shape Of Water a genre movie did win the Oscar for Best Movie. Congratulations to Guillermo del Toro & Co!

What do you think? Did The Last Jedi deserve an Oscar? Should Mark Hamill have received a nomination?

Maybe Star Wars will have better luck next time. Or maybe Disney will hand out C-3PO statues to the cast and crew so they feel better.