BigBadToyStore.com has received their shipment of The Black Series 40th Anniversary Wave 2 today according to an email sent out earlier today. Later in the day, the began processing orders and charging credit cards. If you need these, I would jump on it because you never know who will or won’t receive their shipments! They’re still listed as “in stock” on their website. 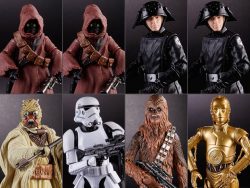