Big Bad Toy Store has there end-of-the-year newsletter up. Click through for details! 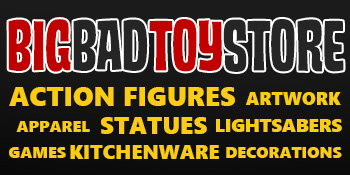 Welcome to the BBTS Newsletter! Please take a look at some of this week’s cool new stuff:

EXTREME SETS POP-UP DIORAMAS
Bring your figures to life with the Extreme Sets Pop-Up Dioramas! These knockout backgrounds can be combined with other action figures to stage the ultimate scenes or use them for figure photography and stop-motion animation.
http://www.bigbadtoystore.com/Search?PageSize=50&SortOrder=New&Company=688

STAR WARS PG 1/72 SCALE MILLENNIUM FALCON MODEL KIT This release of the PG Falcon features stickers instead of water slides to decorate the various hull panels and a translucent light blue clear part in place of the LED system to simulate the color of the Sublight engine propulsion systems of the Falcon as seen in the digitally remastered releases of Star Wars.  $349.99
http://www.bigbadtoystore.com/Search?Brand=2308&Company=81

BTTF 2 MAGNETIC LEVITATING DELOREAN
Kids Logic proudly presents the legendary DeLorean Time Machine based on Back To The Future Part II. It is meticulously crafted with more than 10 LED light-up features across the body. $299.99
http://www.bigbadtoystore.com/Product/VariationDetails/24744

NEW 1/6 SCALE FIGURES, STATUES, AND WEAPONS Add onto your 1/6 scale figure collection with new figures and accessories! Each articulated figure is great for customization, while the scaled weapons and clothing allows you to recreate your favorite or original characters.
http://www.bigbadtoystore.com/Search?HideSoldOut=true&PageSize=50&SortOrder=New&Scale=67

DISNEY D-SELECT STATUES
After the first wave of D-select diorama series, Beast Kingdom brings its second wave of popular animation dioramas to recreate classic scenes with some of the most popular animated characters!  $29.99 Each
http://www.bigbadtoystore.com/Search?SortOrder=New&Series=11881

NEW JAPANESE FIGURES & STATUES
From Idolmaster to Fate/, these anime and video game statues and figures are perfect for collectors!
http://www.bigbadtoystore.com/lists?listid=35

MAFEX FIRST ORDER STORMTROOPER FIGURES
Collect the First Order Stormtrooper and Stormtrooper Executioner as articulated MAFEX figures based on their appearance in The Last Jedi! Standing 6.3 inches tall, these posable figures are ready for action and their newly designed joints make it easier than ever to re-enact scenes from the film.  $92.99 Each
http://www.bigbadtoystore.com/Search?Brand=2308&Company=20

THOR: RAGNAROK NENDOROID NO.866 LOKI
From the hit movie Thor: Ragnarok comes a Nendoroid of Loki! He comes with three faceplates that all capture his personality perfectly, including a standard glaring expression, a condescending expression as well as the listless expression from his famous “surprise” line!  $59.99
http://www.bigbadtoystore.com/Search?PageSize=50&SortOrder=New&Series=55

MEZCO FRIDAY THE 13TH JASON MEGA FIGURE
Mezco lets you take the creepy camper-killer home with the Mega Jason from the Friday the 13th horror film series! Standing an imposing 15 inches, this super-sized psycho comes complete with his trademark machete and plays his iconic signature sound effect that lets you know when Jason is near.  $84.99
http://www.bigbadtoystore.com/Product/VariationDetails/66630

GT-10 BW T-BEAST
The GT-10 BW T-Beast stands just about 10 inches tall in robot mode and transforms into a ferocious ape ready for battle in the jungle. T-Beast comes equipped with a pair of shoulder cannons and includes a double bladed weapon.  $119.99
http://www.bigbadtoystore.com/Product/VariationDetails/66771

JUSTICE LEAGUE MUSEUM MASTERLINE WONDER WOMAN STATUE Justice League is superhero film based on the DC Comics characters of the same name and it is the 5th installment in the DC Extended Universe. Wonder Woman works as an antiquities dealer at the Louvre Museum as Diana Prince. Shortly after the Justice League team assembles, Wonder Woman contributes to the successful offensive against Steppenwolf, forcing the alien invasion into retreat. Following this, Wonder Woman finally reveals herself to the world, becoming an official superheroine!  $949.99
http://www.bigbadtoystore.com/Search?SortOrder=New&Company=421

ANIMANIACS Q-FIG MAX THE GOODFEATHERS
The Goodfeathers, our favorite mobster pigeons, strut down a New York City sidewalk in this charming Q-Fig Max of the popular characters as seen in the TV series Animaniacs from Warner Bros. Animation! $29.99

TRANSFORMERS POWER OF THE PRIMES VOYAGER The Autobots and Decepticons use Prime Masters to wield the godlike powers of the most legendary bots in the universe: the Primes. Prime Masters carry the spark of a Prime, allowing them to share a Prime’s godlike ability with other bots. Anything is possible and everything is at stake when the Power of the Primes is unleashed!
http://www.bigbadtoystore.com/Search?Series=13137

FUNKO RICK AND MORTY PORTAL GUN
Wubba lubba dub dub! Finally, you can travel between galaxies with the Funko, Rick and Morty Portal Gun! Pull the trigger and watch this toy gun emit a variety of lights and noises. This full-size roleplay Portal Gun is primarily used for travel, but don’t be afraid to use it offensively or defensively to avoid your enemies.  $14.99
http://www.bigbadtoystore.com/Search?HidePreorder=true&PageSize=100&Brand=9076

STRANGER THINGS MCFARLANE ELEVEN & HOPPER Made in 7-inch scale, these articulated figures feature spectacular likeness to actors and actresses from the hit TV show, Stranger Things! Each include their own accessories and a stylized Stranger Things-branded display base.  $17.99 Each
http://www.bigbadtoystore.com/Search?Brand=10123

DRAGON BALL Z S.H.FIGUARTS YAMCHA
From Bandai Tamashii Nations comes the long-awaited S.H.Figuarts Yamcha from the Dragon Ball Z series. This figure stands roughly 6 inches tall and has been excellently replicated from his appearance in the Saiyan saga. This figure also comes with different parts to recreate any battle pose from the series!  $64.99
http://www.bigbadtoystore.com/Search?PageSize=50&SortOrder=New&Series=32&Brand=614

MEI SHO DARTH MAUL
Timed for the 2017 Star Wars film come three consecutive releases in the Mei Sho Movie Realization series! The second is Sohei Darth Maul, as envisioned by sculptor Takayuki Takeya. His trademark lightsabers have become a halberd and his face evocative of a fierce Japanese mask.  $89.99
http://www.bigbadtoystore.com/Search?Series=2873

POKEMON FIGMA NO.356 RED
The main character of the Pokemon Fire Red and Leaf Green games, the legendary Pokemon trainer Red is joining the figma series! Using the smooth yet posable joints of figma, you can act out a variety of different scenes. Figma figures use a flexible plastic which allows them to remain proportionate without compromising posing ability.  $82.99
http://www.bigbadtoystore.com/Search?SortOrder=BestSelling&Brand=1170

TAKARA TRANSFORMERS LEGENDS
Transformers Legends is a TakaraTomy toy-line launched in 2014 featuring figures who have appeared in the 30 year history of the Transformers; with premium paint application and a more modern interpretation. Each figure in the line is packaged with a lighthearted web comic that focuses on the character.
http://www.bigbadtoystore.com/Search?HidePreorder=true&PageSize=50&SortOrder=New&Series=2014

TRANSFORMERS: THE LAST KNIGHT DELUXE
The explosive Transformers saga continues with Transformers: The Last Knight, where powerful forces rewrite legend. With the fate of Earth at stake, new heroes must rise in an epic struggle to forge a future for all!
http://www.bigbadtoystore.com/Search?FeaturedIn=10978&Company=5

WONDER WOMAN STATUE PX PREVIEWS EXCLUSIVE Power and grace exude from this Wonder Woman Movie Statue, based off the film’s scans of actress Gal Gadot! Made of high quality polyresin, each 8-inch scale statue is hand painted, individually numbered, and includes a Certificate of Authenticity.  $54.99
http://www.bigbadtoystore.com/Search?Series=4083&Company=166

GEKIDO CLEO 1/6 SCALE FIGURE
Using her powers to seduce and gain control over the minds of men, turning them into her slave-like puppets to carry out each of her missions, Cleo has astonishing ancient secret abilities. BeyondComics.TV with TBLeague brings you the very 1st ever licensed Cleo 1/6th scale action figure doll, utilizing cutting-edge, seamless synthetic-skin technology with a steel skeletal inner-frame allowing for 28 points of posable articulation!  $188.99
http://www.bigbadtoystore.com/Product/VariationDetails/60811

Thanks for your interest in www.bigbadtoystore.com and be sure to check out some of the many new items listed above.

Thanks!
Joel & The BBTS Crew