Wo, mama! Walmart is getting HUGE kicker displays full of The Black Series 3.75″ products. This arrival is probably an effort to dump as much as Hasbro can in Walmart’s lap before the line goes mainstream next year (per our exclusive JTA rumor report we posted this summer). These large displays are currently being found all over the country. JTA readers Steve U. and flying2highagain send us news and images. Click through for more. 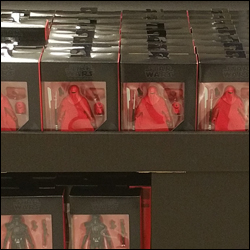 Saw the same old Walmart kicker display that has been shown but they had one additional filled to the brim with Star Wars Black 3.75 inch Imperial Guards and Imperial Death Troopers. Picture enclosed. Checked and many, many more deep behind each one. Looks like a revision wave that also included Jyn, Ahsoka, Ackbar, and Lando. Sadly no Scarif Troopers. Not sure if this is widespread. Wonder if these will be on the nice price cut that we saw on Walmart online for the Sandtrooper, Ponda, Sandpeople, and Proto Boba Fett. Its sad that Walmart held back till now to release these which were several revisions behind. This was found in Tulsa, Oklahoma.