NVIDIA has created two amazing Star Wars themed graphics cards for computer enthusiasts to decorate their tower interiors, using their flagship TITAN Xp platform. Click through for all of the details, and stay tuned because we will be doing a full review of this card soon! And, make sure to read the article to find out how you can pick one of these cards up for only $11.38! 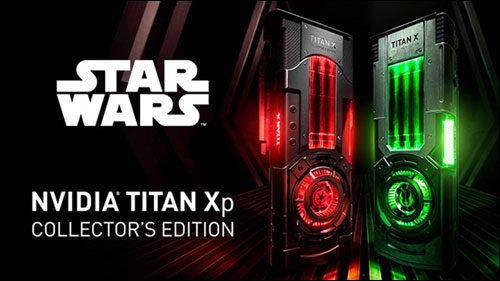 These new Star Wars collector’s edition GPUs pay homage to the light side/dark side dichotomy and contain hints of the Star Wars galaxy, such as the hilt of Luke Skywalker’s lightsaber and light panels reminiscent of the Death Star.

The Jedi Order GPU simulates the wear and tear and battle-worn finish of many items used by the Rebel Alliance, resulting from its die-cast aluminum cover being subjected to an extensive, corrosive salt spray.

Both versions have multiple windowed areas to showcase internals and lighting, evoking each faction’s lightsabers, green and red, respectively. The finishes of both versions took over a year to perfect.

The Jedi Order and Galactic Empire TITAN Xp GPUs use the NVIDIA Pascal-based GP102 GPU, each with 3,840 CUDA cores running at 1.6GHz and 12GB of GDDR5X memory running at 11.4Gbps.

Their staggering 12TFLOPs of processing power under the hood allows Star Wars fans to play any of today’s most cutting-edge titles at the highest resolution with the highest detail quality turned on.

Priced at $1,200, each edition also includes a collectible electroformed metal badge containing the insignia of their preferred alliance.

Get the full details right here!

Being the holiday season, NVIDIA wants to celebrate with their fans by giving away vouchers to buy the amazing Star Wars NVIDIA TITAN Xp graphics cards for just $11.38. No, that’s not a typo, you can indeed buy a $1,200 GPU for eleven dollars and thirty-eight cents with one of our vouchers.

How do you get a voucher, you ask – starting now until Monday, simply share on Twitter and Facebook moments from the Star Wars universe of films, games, comics and books where 1138 is used and tag the post with #StarWarsGPU1138. If we like your response, and #StarWarsGPU1138 is included, you may receive a discount voucher in your private messages on Friday or the coming Monday. Full details after the jump!

Next Article: Last Chance To Enter And Win A $25 The Last Jedi Fandango Gift Card