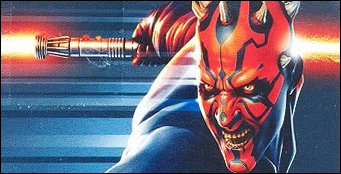 I concede that Episode I is far from being my favorite Star Wars film. But I too have discovered its merits. This doesn’t mean I feel the film is excellent by my standards, but there are important components of it that illustrate Darth Vader’s earliest beginnings. In 1999, Hasbro produced one of the largest toy lines ever for a film: the Episode I line. Most of us remember what a fun time it was on Midnight Madness when the line got launched. Nothing has compared to that night since. Then 13 years later when The Phantom Menace was going “3D” in 2012, Hasbro and collectors were able to party like it was 1999 all over again. It certainly paled in comparison to the 1999 Episode I product launch, but even the sourest fans were able to have some fun and enjoy some of the items that got released. Still, something more ominous began happening instead. We truly began to see the Star Wars line (in general) fall apart. Forecasting in 2012 was off the charts. Rumors exist that retail was sold the bridge that TPM 3D was a new Star Wars film; hence the product overload. But no matter what retail was told, the amount of product that arrived overwhelmed everyone.

Because of the glut of products, Hasbro took a lot of heat from the collecting community in 2012. We were right in the middle of The Vintage Collection, and Hasbro released case assortments that didn’t line up with the needs of retail. The pileups began, and distribution just stopped dead in its tracks. Production numbers on The Vintage Collection wave 10 figures were off the chart. The same case of 12 figures never ceased arriving at retail. Fans everywhere exclaimed, “how many of these did you make?” To make matters worse, TVC waves that followed contained on average 50%-60% of wave 10 repacks. (You think you 6″ collectors have it bad, huh?) It took six months to a year before most collectors started seeing subsequent waves arrive at retail. (Online shops didn’t have as many issues and this is where online shopping took a stronghold.) While no proof exists, many longtime collectors believe that it was TVC wave 10 that brought the collector-favorite line to a screeching halt. Distribution never recovered from these poorly allocated case assortments, and you could find these figures at retail and discount chains for years after the fact. Some still are coming across these figures even today.

Making matters even more complicated, Hasbro for the very first time “dumbed down” the kid-focused line. They walked away from the Saga Legends moniker and renamed this mainstream basic figure line Movie Heroes. It too was overproduced, and it was nearly impossible for future waves to get out. But more importantly, collectors were outraged when the line got launched. We all wondered why we had to pay $9.99 for a single Battle Droid that we only used to pay $6.99 for and got two of them. But this example was the tip of the iceberg that angered longtime collectors. Hasbro didn’t give value to collectors in this line, but they also reached deeply back into their tooling archives and pulled out archaic sculpts that probably should have never seen the light of day again. The whole landscape of collecting was changed in a moment, wrought by poor figure choices and the overabundance of new figures and other toys that should not have been so heavily produced. It was a perfect storm of issues in the middle of what should have been a great time collecting.

So what’s the point of this trip down Memory Lane?

Well, much like how there is a new appreciation for The Phantom Menace (especially for me), I have found a new appreciation for 2012’s Star Wars [The Phantom Menace 3D] lineup. I also have a strong affection for the corresponding/supporting collector-focused wave of The Vintage Collection figures also released in 2012). Yes, perhaps this is much too late now. I’ve come to this realization partly because I can compare today’s line to the ones in year’s past. Because we get much smaller toy lines now, I have been able to spend some of my free time to savor the TPM 3D collection. I have learned that the figures and multipacks I campaigned against in 2012 have newfound charm and enjoyment. It’s hard to believe a half of a decade has bypassed us with regards to this line. But in this time I have come to appreciate the new sculpts that were released from this line look…. even the simply articulated action figures. Some of the best multipacks also came out of this line, including the popular Toys R Us exclusive Ewok Packs and Yavin Pilot Packs sets. And retailer exclusives like the all-new Speeder Bike and Biker Scout just blew us away. Also, while small, we received some awesome characters from The Clone Wars line.

In some instances, even the more kid-friendly sets have impressed me. Old sculpts received dynamically new and more colorful paint operations. And Hasbro was finally able to assemble similar characters from across years of different line looks and release them as a cohesive set. I am thinking about the Podracer Pilots exclusive and even the one that got disappointingly canceled. But there were all-new figures too. Sure, they came with simpler articulation, but it is now impressive to see how the likenesses stack up today. Then there was the whole “Discover The Force” promotion which I purely enjoyed (even back in 2012). Walmart had an exclusive set of 12 basic figures; each came with a pair of 3D glasses. There were also other cool exclusives part of this promotion like the Royal Starship Droids Battle Packs and beasts and vehicles. Sure, not everything released was wise or perfect, but no one could fault Hasbro for getting out a fair representation of characters based on Episode I out to the market.

Even the Movie Heroes line got pretty fun at the end. Hasbro eventually added all-new sculpted figures in the line, and characters like Padmé, Obi-Wan Kenobi, and Qui-Gon Jinn never looked better and came with gimmicky things like light-up lightsabers and action gear. Very few adult collectors were ever able to admit what merit this line had. It’s sad that sometimes we’re so willing to dismiss something just because it doesn’t fit our preferences. Hasbro provided an impressive lineup of super-articulated 3.75″ action figures in The Vintage Collection to complement the TPM 3D line, but many still complained about those, even before they started piling up. Sure, there were some redundant figures released. Characters like Qui-Gon Jinn and Obi-Wan Kenobi (the same sculpts) were released three or four times across different facets of the line. It was pure madness. But overall, in retrospect, it was a pretty amazing lineup.

Anyway, I say all this to encourage you to check out the Star Wars [The Phantom Menace 3D] line in both our Research Droids Reviews and Visual Guides. Although not completed, I am in the middle of updating the galleries of many of these releases, but you should jog your memory and see if you can also come to appreciate what Hasbro made for everyone back in 2012. I know I have a newfound appreciation. I believe you will too.