So, Where Are Those 40th Anniversary Wave 2 Figures?

You saw our friendly warning here months ago about about the 40th Anniversary The Black Series 6″ wave 2 figures; that they were completely sold out. Various interviews with Hasbro at SDCC this years allowed some to believe that they were shipping at that time, but we were cautious to not be eager about this news. But as you know, no units arrived at retail and many people’s pre-orders weren’t fulfilled and remain open or have been canceled. Now Hasbro answers Star Wars Action News’ question (from their HASCON interview) that they’ve all been shipped. Now, there could be some in transit somewhere, but it looks like these figures are finally all gone. We believe they’ve always been gone for months now (and actually have sources that confirmed this). If you need them, check eBay quickly because there is an even stronger chance now with this new confirmation that you’ll never see them again… unless Hasbro orders a new batch to be produced. As you can see from the listings, some figures go for obscene amounts. 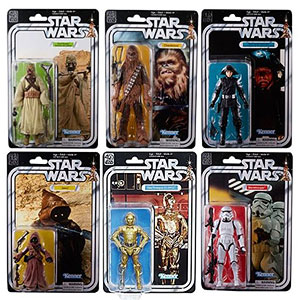