An Unbelievable Miracle Has Happened.... Mine Eyes Have Seen....

Oh my heck! It’s another Festivus miracle! Aside from TARGET exclusives, my local TARGET has received NOTHING NEW since Rogue Friday last September (they even still have more than a half dozen The Force Awakens 5POA figures). But this past Saturday I was stunned to find a broken up case assortment that included three (3) beat-up Stormtroopers, Chewbacca, two (2) Jawas and one (1) Death Squad Commander. The figures were shoved against their will into a tiny peg space not meant for these figures, but hey, I can no longer say I have never seen 40th anniversary figures in the wild. Shocking! 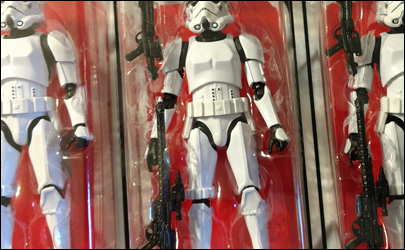